Land of Medievals The Card Game retail version is now available to purchase at DriveThruCards:

Land of Medievals The Card Game is a Medieval Fantasy card game with mechanics such as combat, dice rolling and improvement cards.

Fight against fantastic creatures and opponent players, siege enemy castles and become the one and only King of the Land.

Inspired by ancient mythologies the game offers a unique gameplay, you will need to earn Army Units and Improvement cards for your faction, kill creatures at the outside encounters and make intelligent strategies using your cards to defeat opponent players.

Fight against opponent players while you battle in encounters and recruit troops for your army and King. Each faction has a King and an army, you can explore the Outside searching for encounters against fantastic creatures and Siege enemy castles. 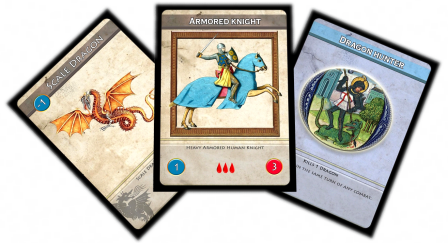